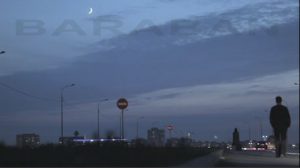 Angelina Nikonova’s first full-length film, Twilight Portrait deals with a wide range of issues in contemporary Russia, including sexual violence, dysfunctional families, child abuse, and police brutality.   The whole world surrounding the heroine lacks human empathy and the individual is completely helpless in this world.  Nikonova captures the gruesome reality of contemporary Russia, similar to taking pictures from the perspective of a melodramatic figure, Marina (Ol'ga Dykhovichnaia).
Marina, an attractive woman, has a rich father, a loving husband, a lover, no children, friends who prepare a surprise birthday party for her, a fancy apartment, and wealth to support her ridiculously low-paying but interesting job as a social worker―all of, which is summed up as typical “middle-class” well-being.  One day, however, she is brutally raped by the police and her “perfect” life falls to pieces.

According to familiar melodramatic tropes, her position as a “happy woman” is built on sand.   Her husband is much more interested in whether her rich father will help his business project or not; her aging lover, Valera (Sergei Goliudov), clearly neither satisfies her in a sexual relationship nor in a platonic one; her friends are completely indifferent to her situations.  But from the beginning of the film, Marina is already disillusioned: she knows that the people who surround her are parasites and hypocrites, and that she is part of that hypocritical society.

Her horrible experience, in fact, changes her attitude towards her life and the surrounding world.  At her job and in the hospital where her friend works, she realizes the indifference and ignorance in society, and that she is completely helpless as an individual social worker.  She walks along the streets and visits a tacky eatery, the places she visited on that horrible day.  The desolated city shots, foregrounded by grey apartments in gloom, provide a contrast to the claustrophobic indoor shots using close-ups, intensifying the sense of her isolation.  During her birthday party, half-drunk, she suddenly debunks the domestic lies and secrets of her family and friends. 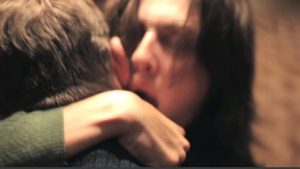 The most enigmatic moment occurs in a scene in the elevator.  With a broken bottle, she follows Andrei (Sergei Borisov), one of the perpetrators.  But in the elevator something mysterious happens in her mind.  Instead of physical eye-for-an-eye punishment, she decides to fellate him, something the audience can understand through the close-up shot of his face.  This begins a strange relationship: she turns away from the airport on the way to her mother in Simferopol, and comes to his house with a camera she bought out of pity, or indifference, from an old man while waiting for Andrei.  She stays at Andrei’s house, enjoying violent sex and performing maternal (or wifely) duties in his hyper-masculine space: she scrubs, cleans, and cooks meals.  Has she become the slave of a masochistic love or is she a practitioner of “Christian” love?

The clues given to the audience are merely the visual scenes of her everyday life, since the film is reluctant to reveal character depth.  The director stands back and observes Marina without any judgment.  Lack of emotional demonstrations and in-depth dialogue make it more difficult for the audience to explore changes in the psychology of the characters.

Parallel scenes provide a stark contrast between the two milieus surrounding the lovers, emphasizing their social status: the middle class and working class; a fancy apartment to which one is admitted only through a voice monitored security system and Andrei’s grey apartment with a dusty staircase, modern furniture—including a karaoke machine—and all sorts of odds and ends, including a punching bag; the high quality and abundant food at Marina’s birthday party in her home and a lousy sausage with a clump of ketchup. In the scene at Marina’s workplace, her table also obviously divides her in an official manner from the working class, whose lives are surrounded by alcohol and violence.

Marina, who only faces them across the table, is forced to cross the boundary.  In the police car, Andrei sneeringly tells the other cop in the back to “treat her to some working class stiffs.”  As she stays at Andrei’s house of her own will, however, Marina integrates herself into the new one.  She tries to acclimate to that society, preparing food for Andrei, being adventurous company with his brother, feeding his old man.  If she had been taciturn, cold, and cynical to the degree of arrogance at home and at work, here she talks and laughs loudly.  She also repetitively says “I love you”( eliciting violence from Andrei, who clearly fears the word), as if she wants to alleviate his roughness and violent tendencies.       The final scene is left open-ended in an unsettling way: a long tracking shot of Marina walking on the street with a panoramic view of the city during twilight.  She moves toward nowhere and Andrei silently follows her at a distance, disarmed, as if her maternal care had turned out to be a successful remedy.

The series of clichéd images of rape, nudity, and violence at the beginning of the film make the audience slightly uneasy, just as the ambiguous style sometimes leaves the audience perplexed or disturbed when the boundaries between violence, rape, sex, love, and victimization are blurred.  This is especially true in the episode when a girl implicitly accuses her father of sexual abuse during her consultation with Marina.  The absence of clear distinctions reaches its peak when Marina talks to Andrei (“what if he didn’t”) right after Andrei threatens to kill the father.  Despite an inconclusive play with melodramatic tropes, whether intentional or unintentional, the film sheds light on specific moments of cruel reality.  In a world, in which everything is sunk in indistinguishable gloom regardless of class and wealth, those moments could be captured only in the mode of “twilight portrait.” 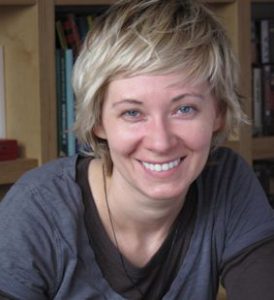 Angelina Nikonova is a writer, director and producer. Born in Rostov-on-the-Don, she moved to New York, where she graduated from the School of Visual Arts in 2001.  Her degree work, Isosceles, won the best experimental film award in the Cinevue Film Festival in Florida and the best director award in the Saint Ann Festival in Moscow.  In 2005, she wrote, directed and co-produced the documentary Point of Return.  Twilight Portrait is her debut full-length feature film.