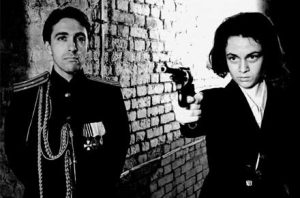 Much has been made of the fact that there is a famous Socialist Realist novel called Two Captains and a couple of film adaptations of this novel, to which Two Captains II pretends to a be a sequel. The original version was filled with Communist romanticism, and Sergei Debizhev’s film capitalizes on the spirit of adventure that for several Soviet generations was embodied in the image of a sea dog, thanks to multiple works of literature, cinema, radio and other media. Kaverin’s work is a sweeping tale covering the period from the early 1910s to World War II. Debizhev uses a similar timeline and enjoys a game of “mapping” distant places onto his story, even more than Kaverin. The film’s history and geography, however, are all skewed; familiar names and places are distorted beyond recognition. The philosopher Spengler is held captive by murderous Manchurian monks together with Captain Dreyfus; Lenin and Dzerzhinskii are part of an international cocaine trafficking ring; the leading Soviet star of the 1930s, Liubov' Orlova, serves as a projectionist for films by MGM and Leni Riefenstahl.

Contemporary critics were divided on the question of whether the film’s playful mythmaking (or myth-breaking) left anything positive in its wake. Some maintained that it had failed to break free from the previous aesthetic models by using the same type of Soviet montage and authoritarian voice-over narration. Others lauded the film for the attempt to “part with its past cheerfully” (this phrase is itself a parody of Marx’s pronouncement). Still others suggested that all this had been done much better previously, by such directors as Maksim Pezhemskii, Oleg Kovalov, and, of course, Aleksandr Sokurov. The late 1980s-early 1990s saw a proliferation of attempts to present postmodernist interpretations of the Soviet past, using fragments of crumbled Socialist Realist discourse and classical montage techniques of the 1920s as their building blocks.

There is something different about Two Captains II, however; something that bothered its first viewers, and something that turned it, unlike all the others, into a cult film. Whether Debizhev’s film works towards its eponymous Socialist Realist predecessor or against it—the point is moot. If we were to present its title graphically as 2 Captains 2 (its palindromic quality is apparent when it is spoken aloud), it turns into a circus double act, akin to a film made by the “father” of Soviet montage cinema, Lev Kuleshov, during a time when Socialist Realism was on its way. His Two-Bul'di-Two (1930) merged circus aesthetics and class consciousness in a dramatic tale of two clowns, a father and a son, divided by their political allegiances. Debizhev’s double act is performed by the two most prominent figures of the Leningrad rock scene of the time—the leader of Aquarium, Boris Grebenshchikov, and the genius composer and pianist Sergei Kurekhin. Their characters are two captains of the Russian imperial navy, struggling against Bolsheviks as well as against world conspiracy, and, as many synopses state, world chaos. Similar in both cases is something that in the 1930s had earned Kuleshov and many other Soviet montage experimentalists of the 1920s the derogatory title “formalist.” 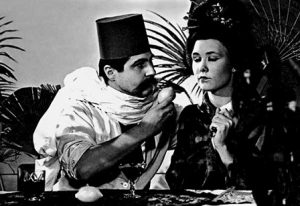 The film’s style is highly performative. It is essentially a series of attractions (and here Eisenstein’s term returns to its proper realm, that of a circus performance), whose connection to the main plot is incidental, because essentially, there is no plot. Its semblance is created by formal means such as overabundant intertitles, editing techniques (double exposure, split screen, speeding up), and, most importantly, by the voice-over―it is the most misleading feature of the film and the main source of its irony. Taking its cue from classical Soviet documentaries, the voice-over is presented as the ultimate authority and the source of impartial truth. The film simultaneously subverts this reading by making the narration extremely illogical, disjointed, and self-mocking. This feature makes the film closer not even to a mockumentary, but to an even murkier subcategory of schlockumentary, which uses sleight-of-hand editing techniques to manipulate the viewer into a predetermined propagandistic conclusion (most Soviet—as well as Nazi—documentary films and newsreels would appear as schlockumentary from today’s point of view).
The voice-over narration in Two Captains II is sometimes illustrated by images (in the best documentary—and schlockumentary—tradition), but at other times it simply describes images that seemed interesting or unusual to the director. Of course, the film can be seen as subverting the old political system, with all its wacky references to cocaine, the virus of Communism, and the blind Fanny Kaplan who, according to the official Soviet version, tried to shoot Lenin in 1918. It could also be seen as subverting the old aesthetic system of Socialist Realism. Ultimately, it seems to undermine the whole idea of a believable, internally consistent narrative, especially cinematic.

Two Captains II is probably the first Russian film to be described immediately after its release as “camp.” A highly perceptive St. Petersburg critic, Sergei Dobrotvorskii, even quoted Susan Sontag in his review, which described the film as a sort of “Ouroboros”: a serpent eating its own tail, an interpretation that interprets itself, an irony that is directed towards irony. The film is indiscriminate in its appropriation and reuse of old Hollywood and Soviet films, avant-garde animation, and Nazi newsreels. Its end credits include thanks to Timothy Leary, Tibetan monks, and the citizens of the Democratic People’s Republic of Korea. Several inserted music videos are connected to the “main story” only through the figure of the singer/actor/composer Grebenshchikov. The soundtrack is a mix of haunting music written mostly by Kurekhin; two voice-overs (by Kurekhin and the actor Andrei Tolubeev); poems by Pushkin; and, in the background, a cacophony of different languages. What makes the film stand out in the postmodern, post-Perestroika era are the same elements for which it came under criticism: there is no real point to its formal experiments, no consistent meaning behind its subversiveness, and no deeper truth behind its verbiage. The point is that there is no point. 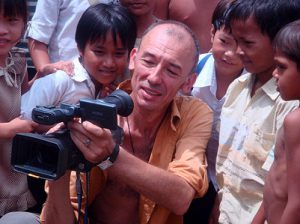 Sergei Debizhev is a professional graphic designer whose first cinematic experience was working as an art director for Aleksandr Sokurov’s documentary films of the mid-1980s. From there he quickly moved to making music videos and documentary films for the leading figures of Leningrad’s rock-n-roll scene, such as Boris Grebenshchikov and Sergei Kurekhin, both of whom later appeared in Debizhev’s first feature film, Two Captains II. One of the renowned Russian music video directors, in the early 2000s he started a series of documentary films exploring religions and cultures of different corners of the world, from Italy to Cambodia. His second feature film, The Golden Mean, came out in 2010.